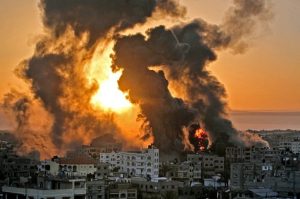 An International human rights group has urged the International Criminal Court (ICC) to look into potential war crimes following the “unlawful attacks” committed during Israel’s deadly assault on the Gaza Strip in August.

Using photographs of weapons fragments, satellite imagery analysis, and testimony from dozens of interviews, the rights group reconstructed the circumstances around three specific attacks carried out during the offensive, it said in a report in late October.

“Israeli authorities boasted about the precision of their operation.” Yet, the rights group found that “victims of these ‘precise’ attacks included a four-year-old boy, a teenager visiting his mother’s grave, and a 22-year-old student at home with her family.”

Agnès Callamard, Amnesty International’s secretary general said that “Israel’s latest offensive on Gaza lasted only three days, but that was ample time to unleash fresh trauma and destruction on the besieged population.” “The three-day deadly attacks we examined must be investigated as war crimes.”

Callamard pointed out that the violations documented by the rights group were perpetrated in the context of Israel’s ongoing illegal blockade on Gaza imposed since 2007, describing it as “a key tool of its apartheid regime.”

“Palestinians in Gaza are dominated, oppressed and segregated, trapped in a 15-year nightmare where recurrent unlawful attacks punctuate a worsening humanitarian crisis,” she elaborated, noting “As well as investigating war crimes committed in Gaza, the ICC should consider the crime against humanity of apartheid within its current investigation in the Occupied Palestinian Territories.”

According to the report, all the witnesses, survivors, and victims’ relatives interviewed by Amnesty demanded accountability for the heinous crimes committed by the Israeli regime forces.

Wissam Nejem, who lost four cousins in the Israeli attack on al-Falluja cemetery in Jabalia in the northern Gaza Strip, told the rights group “Nothing can bring back our dead children, but truth and justice could at least give the families some peace.”

On August 5 Israel unleashed a wave of air attacks on Gaza. The so-called “preemptive” operation against the Palestinian Islamic Jihad, killed at least 49 Palestinians, including children. According to the UN, around 360 were also injured during the deadly onslaught.

In 2021, the UN documented 2,934 grave violations against 1,208 Palestinian children in occupied Palestine and the Gaza Strip. The UN Human Rights Council, Human Rights Watch, and other international human rights organizations have accused Israel of apartheid in the past two years.

Local and international rights groups have condemned Israel’s excessive use of force and “shoot-to-kill policy” against Palestinians, at the time the mainstream media and Western powers turned a blind eye to the atrocities committed by the Israeli occupation forces on a daily basis.

This entry was posted in Blockade, War. Bookmark the permalink.