an other anniversary- 55 years of occupation 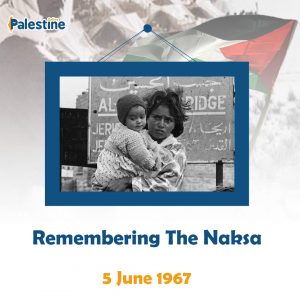 Israeli, launched this as a  pre-emptive attack against Egypt, Jordan, Iraq and Syria, and hit severely the air defences of these countries, making extimated 20.000 deaths.

The Isreali Prime Minister and Defence Minister Levi Eshkol and Moshe Dayan was the chief of IOF that entered Jerusalem. Moshe Dayan, declares on June 7, 1967, that Israel will never relinquish control of Jerusalem.

On the same day, June 7, 1967, Prime Minister Levi Eshkol issues a declaration, condemning the Jordanian attacks on Western Jerusalem and clarifying the authority over the Holy Places in Jerusalem now that Israel has taken control of the entire city.

On July 4, 1967, on the initiative of Pakistan, the UN General Assembly adopts a resolution calling on Israel to desist from any changes in the status of Jerusalem.(Resolution 2253.)