“Free and Equitable access and distribution of COVID-19 vaccine in oPt”: a joint letter by Oxfam, NRC, Action Aid, MAP, Save the Children, Feb 18

Report by Euromed on the situation in Gaza

Israel is a short story

by Basim Naim in The Palestinian Information Center

On February 15 2.000 Sputnik vaccines were sent by the Palestian Authority, followed on the 19 by aboutt 20.000 donated by United Arab Emirates. Vaccinations have started immediately from fragile people, medical-paramedical personnel. Closures have been released.

Update on situation in Gaza 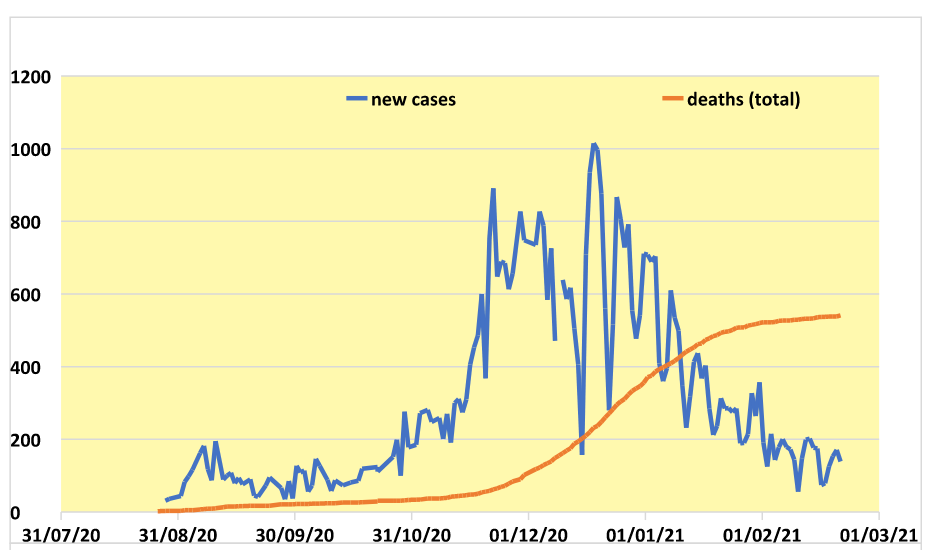 COVID-19 vaccines for Palestinians – The Lancet

The Lancet Palestinian Health Alliance (LPHA), established in 2009, following the Lancet Series on health and health care in the occupied Palestinian territory, is an informal network of Palestinian, regional, and international colleagues researching the health of Palestinians. Ten annual scientific conferences have been held, with 748 research presentations involving more than 1000 coauthors. The LPHA has no representative or political purpose and prefers to speak only via the evidence presented in research studies. In the current COVID-19 vaccination crisis, however, we, the Steering Group of the LPHA, feel obliged to speak out.

Primary prevention of COVID-19 is crucial in all countries, but especially in the occupied Palestinian territory, including the West Bank and Gaza Strip, with its limited ability to cope with a surge of clinical cases. The Gaza Strip in particular has been under intensified blockade by Israel since 2007, resulting in shortages in medical supplies and clinical capacity.

Israel has denied its status and role as an occupier of the West Bank and the attendant responsibilities for the health of the occupied population, as laid down in the Geneva Convention and highlighted by the UN and 18 human rights organisations.

This denial is grossly at odds with facts on the ground, including: the limited control of the Palestinian Authority, involving only 38% of the West Bank, with the other 62% under Israeli military control; the building of 125 settlements on Palestinian land and about 100 outposts, with their associated infrastructure, including separate roads to Israel; the demolition of Palestinian buildings and destruction of agricultural land; the discriminatory nature of water management, favouring settlement communities and undermining Palestinian communities; and the impunity of settler violence. These are the hallmarks of an occupying presence, with implications for the health-care system and the health, livelihoods, and prospects of Palestinians.

Israel is complicit in the increased vulnerability of the Palestinian population to COVID-19. Israel has not only a legal but a moral responsibility to secure the urgent availability of approved vaccines. We call on physicians and other health professionals to raise their voices and put pressure on the Israeli Government to provide vaccines to Palestinians, including Palestine refugees on the West Bank and Gaza Strip.
The views expressed in this Correspondence are those of the authors and do not necessarily reflect the position of their institutions. The authors are members of the Steering Group of LPHA and committed to supporting the development of research on the health and health care of Palestinians. GW is a Trustee of the UK charity Medical Aid for Palestinians.

On the eve of World Cancer Day, a letter from Gaza

8,644 new cancer cases registered in Gaza during the recent years, as the besieged enclave records new 2000 cases annually, head of the oncology department at the European Gaza Hospital, Ahmed Al-Shurafa, said.
Breast cancer is the most common in the Gaza Strip, at a rate of 18% among women and men, followed by colon, leukemia, thyroid, and lung cancer.

Cancer patients in the Gaza Strip suffer as a result of the shortage of cancer drugs and many other patients are transferred to hospitals abroad because of total absence of their needed medicines, while some cases cannot travel as a result to the blockade imposed by Israel on the Gaza Strip in general and the obstacles imposed by the Israeli occupation on travellers through crossings in particular, Al-Shorafa added.

Among the challenges facing patients, in addition to the drug crisis and the travel ban, is the lack of devices in the Gaza Strip for nuclear and radiological scanning to detect different types of cancer, which delays the diagnosis of the disease in its early stages.

The international community is urged to intervene to provide the needs of cancer patients and to put pressure on the Israeli occupation to lift the siege and enable freedom of movement.

Suffocation and Isolation: 15 Years of Israeli Blockade on Gaza

For 15 years, the Gaza Strip has been witnessing a suffocating blockade imposed by the Israeli authorities that has affected all social, economic and humanitarian sectors. Despite the humanitarian situation in the Gaza Strip reaching unprecedented levels, the blockade remains imposed on the enclave in a way that clearly shows how two million people can lead a decent life.
Israel began the Gaza blockade after Hamas won the legislative elections. Greater restrictions and sanctions were imposed after the elections in January 2006. The blockade was further tightened in mid2007-.

Catastrophic effects of the siege of Gaza: the EU must act, now, to stop this crime

Since 2007, the Palestinian inhabitants of the Gaza Strip, now 2 million people, have been subject to a blockade by Israel.

This blockade impacts all the aspects of the population’s daily life and it consolidates the fragmentation of the territorial and political Palestine, undermining dignified life and self-determination for the people towards the construction of a democratic and independent state.

Position paper of the European Coordination of Committees and Associations for Palestine. Read the full briefing here.