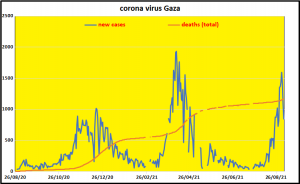 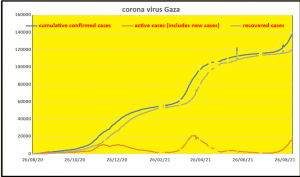 By  September 5, the number of cases of Covid detected in Gaza continued to rise  and they totaled 9082 new cases for the last week, compared to 340 in the middle of July.

The people that died this week are 29, compared to 6 in the middle of July.

Last week vaccination started for the students in the high schools. 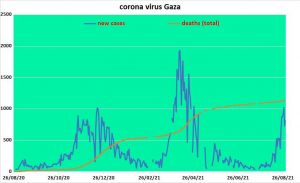 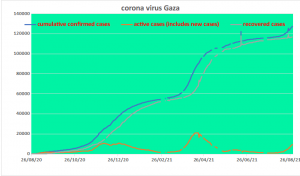 Comparing the total of new confirmed cases these are increasing since the previous months and reached in late August over the level of cases in the period of the outburst of infection in April. An alert to poeple was sent by the Ministry of Health to vaccinate. For the time being the impact of the rise in infections on the number of deaths, that anyhow always trails after that of infections, did not yet manifest itself.

The delta variant, first detected in West Bank early August, was confirmed also in Gaza in the middle of August.

Follow up, the difficulties of war do not end with attacks

Gaza after the attacks- unexploded bombs

Gaza: Nine out of ten children suffering from PTSD after Israel’s May offensive 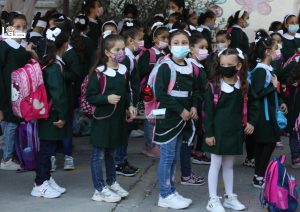 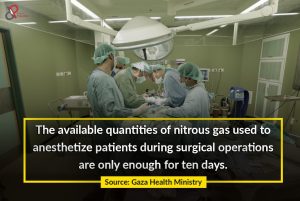 The Massachusetts Coalition for Health Equity stands with Palestine: A call to action

On behalf of 400 medical, public health, and community leaders, the Massachusetts Coalition for Health Equity is calling on Scientific American to immediately re-publish an article on Palestine solidarity that it removed, and to end its censorship of Palestinian voices.
The Call

Is the international regulation of medical complicity with torture largely window dressing? The case of Israel and the lessons of a 12-year medical ethical appeal

This is the account of an ongoing appeal initiated in 2009 by 725 doctors from 43 countries concerning medical complicity with torture in Israel. It has been underpinned by a voluminous and still accumulating evidence base from reputable international and regional human rights organisations, quoted below, and has spanned the terms of office of four World Medical Association (WMA) presidencies and two UN special rapporteurs on torture. This campaign has been a litmus test of whether international medical codes regarding doctors and torture actually matter, and are applied rigorously and even-handededly, particularly when compelling evidence incriminates a WMA member association. Our findings in the case of Israel suggest that this is not true, and that impunity largely operates. The WMA seems in partisan violation of its mandate to be the official international watchdog on the ethical behaviour of doctors. And as the IMA case demonstrates, by their inaction national medical associations or other regulatory bodies appear to function at base as buttresses and shields of the state.

The decision of the Israeli authorities to close the headquarters of the Palestinian Health Work Committees will have dire consequences for the health needs of Palestinians throughout the occupied Palestinian territory, Amnesty International said.

Health and Human Rights in Gaza: Shame on the World

want to begin by offering my greetings to all those here today. I dearly wish that conditions in Gaza were different, enabling me to share the experience of the conference directly with you by taking part directly and actively. The theme of the conference touches the policies and practice of Israeli abuse that have been victimizing the people of Gaza for such a long time. The population of Gaza already faced a lamentable situation ever since the occupation began in 1967, but it has grown far worse since the Gaza elections of 2006, as reinforced by the changes in political administration that occurred in the following year. Israel’s policies have been systematically cruel and abusive, disregarding the legal standards and moral values applicable to the behavior of an Occupying Power. These standards and values are embodied in International Humanitarian Law (IHL) and International Human Rights Law (IHRL).

Gazan society is enduring its fifth health emergency in 12 years, and the biggest since 2014 (when Operation Protective Edge caused 2,200 deaths, destroyed 80,000 homes, and rendered 500,000 people homeless). (1) This time as before the main Shifa hospital has been overwhelmed – it received 1,948 wounded people, of whom 25% needed emergency surgery and intensive care. The Ministry of Health building, 9 hospitals, 19 clinics and the only Covid testing laboratory were all bombed and damaged or totally destroyed. (2) (3) (4) Targeting health facilities and staff is a breach of the Fourth Geneva Convention. Moreover health services continue to experience the debilitating effects of Israeli blockade, now 14 years old, which operates as a form of societal de-development.