The Water is Surrounding Us’: Gaza Grieves as Israel Opens Floodgates 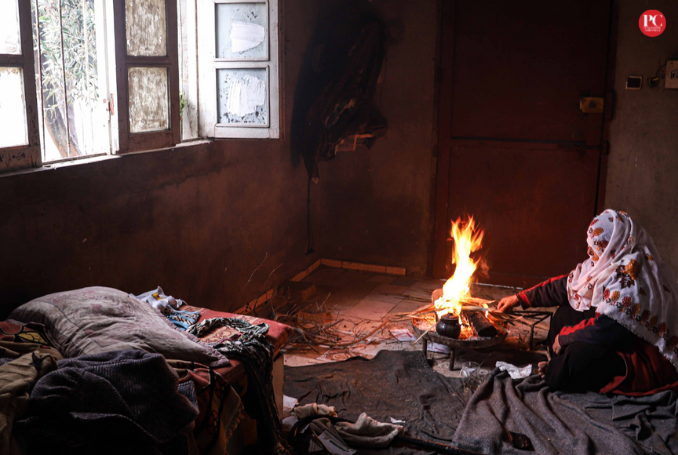 ‘The Valley is Flooded’

Ibrahim Abuqutaifan’s straw house perches on the edge of the valley, in a rural area called Al-Mashala. I spoke with Asma Abu Qutaifan, 41, about what happened.

“It was nighttime, and there was heavy rainfall,” she told me. “We went to bed early because it was a cold and wet winter. While we were sleeping, the phone rang.’’

“The caller was my neighbor, saying: ‘You must flee your house now! The valley is flooded!’ It’s hard to express how scared I felt. This was the worst nightmare I ever had,’’ she added.  “As I woke up my six children, dirty water filled the house. We were swimming in that unclean water, trying to get out,’’ she continued. “Then we couldn’t even flee; the water surrounded us. Municipal crews got stuck in the mud and couldn’t reach us.”

Holding back tears, the mother went on, telling me that a neighbor heard her daughters crying and he rushed to help them get to a safe area. Had the neighbor not heard them, they would have all drowned. As it was, everything in their house was ruined.

Meanwhile, her husband Ibrahim, 48, had hurried to look after his sheep. “The first thing I have to do is save the livestock. I had to move them to another place. We totally depend on livestock breeding. It is our only source of income,” he said.

Since that night, Asma and her children have lived in fear of the floodgates suddenly reopening with no one nearby to help them. Although they survived, the ordeal for their family was not over.

In a sodden house in another part of Al-Mashala, Waaed Mesmeh, 25, is still mourning the death of her husband, Abdullah Qutaifan,  29, nephew of Ibrahim.

Abdullah had called his wife at 5:59 pm as he was coming from prayer at the mosque close to his uncle’s house, in the valley area called Berka. He could see the severity of the flooding. “Waeed! Take care, close all the windows tightly!” he warned.

“I never thought that would be the last time I would hear his voice,” Mesmeh said.

Qutaifan was known as a kind and considerate neighbor, always there to lend others a hand in times of need.  This time was no different. “When he realized that the valley where his uncle lived was rapidly flooding,” Mesmeh said, “he just rushed to help them.”

When he arrived, the power was out, and the house was already full of water. Qutaifan and his cousin ran to cut the three electrical cables that ran from the street to the house, as they were not grounded, and the men wanted to avoid any electrical short circuits before the power was restored.  But it was too late.

“The electricity suddenly came on and killed Abdullah immediately,’’ said the bereaved widow.

Qutaifan’s mother and sister had been killed in 2014 when their house was bombed in the Israeli assault on Gaza in which 2251 Palestinians, including 551 children and 299 women, died.

“He was always saying how deeply he missed them,” Mesmeh said. “He passed away, and now he has gone to join them.”

The mayor of Deir Al-Balah, Diab Al-Jarro, talked about the tragedy.

“Israel opened three floodgates feeding Wadi al-Salqa‎ in the middle of the Strip last Sunday at almost 7 PM, which allowed enormous and unusual amounts of water to gush into the valley stream,” he said.

He pointed out that the fragile sewage network in the rural area had only been operational for three years. During rainy days in Gaza, floods often occur, making life in the Strip even harder than usual. But the huge influx of water that inundated the rural areas when the floodgates were opened was disastrous.

According to Yahya al-Sarraj, the head of the Union of the Gaza Strip Municipalities responsible for street maintenance, “the most important reason for the weakness of the infrastructure is the continuous Israeli assaults, particularly in 2021, when the infrastructure was deliberately targeted with missiles that reached 10 to 15 meters underground.”

“The ongoing Israeli siege and the inability of municipalities to self-finance infrastructure projects, along with rapid population growth, intensify the problems,” he said.  “Israel sometimes prevents the entry of necessary materials, including sewage pipes and bulldozers needed for waste transportation,” Al-Sarraj noted that some people have resorted to throwing garbage into the streets.

“Sewage pipes in service for more than 20 years should be replaced.”

It is winter in Al-Mashala. The season can be beautiful, filled with warm fires and joyful family gatherings, with time for contemplation. But in rural Gaza, things are unpredictable: suddenly, people’s homes and farms can be flooded, drowning their crops; the power cuts off, and people can be killed.

Residents of this area constantly live on a precarious edge, and these events have overshadowed the season’s happiness. But the people of Al-Mashala keep helping each other: they grieve together, and they resist.