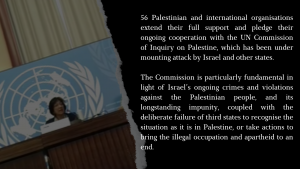 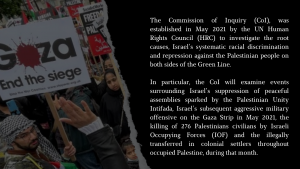 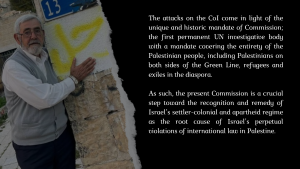 Date: 12 August 2022
The undersigned organisations extend their full support and pledge their ongoing cooperationwith the UN Commission of Inquiry on Palestine, which has been under mounting attack, led by Israel, including recent smearing of its work and members as antisemitic, and calls for its disbandment.
The Commission of Inquiry (hereinafter the CoI or the Commission), was established in May 2021 by the UN Human Rights Council (HRC), to investigate underlying root causes of Israel’s systematic racial discrimination and repression against the Palestinian people on both sides of the Green Line. In particular, the CoI will examine events surrounding Israel’s suppression of peaceful assemblies with lethal force intended to quash the spark of Palestinian Unity Intifada,
Israel’s subsequent aggressive military offensive on the Gaza Strip in May 2021, and the killing of 276 Palestinians civilians by Israeli Occupying Forces (IOF) and illegally transferred in colonial settlers throughout occupied Palestine, that month.
The Commission is particularly fundamental in light of Israel’s ongoing crimes and violations    against the Palestinian people, and its longstanding impunity, coupled with the deliberate failure of third states to recognise the situation as it is in Palestine, or take actions to bring the illegal occupation and apartheid to an end, including failing to implement recommendations from previous UN investigative mechanisms. The latest aggression on the population of the Gaza Strip
launched by Israel on 5 August 2022, which led to the killing of 46 Palestinians including 16 children and four women, and the injury of 360 Palestinians, is yet another flagrant example of Israel’s ongoing war crimes against the Palestinian people which it is allowed to perpetrate without any accountability and countermeasures. The Commission is vital to investigate the ongoing violations and international crimes within their root causes, with an important mandate
towards ending impunity and ensuring legal accountability. If not addressed as a matter of urgency, these root causes and Israel’s impunity will continue to produce cycles of violence at the expense of the inalienable rights of the Palestinian people. The latest calls for disbanding the Commission will only further aggravate violence, and impunity for international crimes perpetrated by Israeli authorities, and entrench the denial of the right to self-determination of the Palestinian people.
Since its establishment, the Commission has been under pressing and coordinated attacks by Israel, a US-led coalition of States, and civil society, alleging its mandate and work as “biased”
and “disproportionately focusing on Israel”. For example, during the interactive dialogue of the CoI’s mandate at the 50th session of the HRC on 13 June 2022, some 22 States, led by the United States, condemned the CoI’s mandate and called for the halt of the “longstanding disproportionate attention given to Israel in the Council”.
Most recently, following Commissioner Miloon Kothari’s media interview on 25 July 2022, the CoI has been smeared as antisemitic, taking quotes from Kothari&#39;s interview out of context while

using antisemitism accusations to halt the CoI’s investigation into Israel’s international crimes against the Palestinian people, including the crime against humanity of apartheid.
Such smearing and attacks included a letter on 31 July 2022 by Prime Minister Yair Lapid to United Nations Secretary-General António Guterres, accusing the Commission of endorsing and fuelling antisemitism and demanding, “the immediate removal of all three members of the Commission of Inquiry tasked with investigating Israel, and the disbanding of the Commission.”
Representatives of a number of States have also condemned the Commission and Mr. Kothari’s remarks as antisemitic, including: the United States, France, Canada, Germany, the United Kingdom, the Netherlands, and Austria.
Since its establishment, Israel has been systematically supressing and silencing the voices of human rights defenders and civil society organisations, whether Palestinian, regional or international, advocating for the realisation of the rights of the Palestinian people and attempting to challenge Israel’s impunity, and its apartheid regime. Such attacks have also targeted international accountability mechanisms, including UN international Commissions of Inquiry
and Fact Finding Missions.
Israel has a record of attacks and non-cooperation with UN investigative bodies, UN special rapporteurs and the staff UN Office of the High Commissioner of Human Rights, including by preventing the entry into Palestine, leading organised lobbying efforts against such bodies, and engaging smear campaigns accusing the bodies of bias and ‘antisemitism’. As such, the latest attack on the mandate of the CoI is a continuation of Israel’s systematic efforts to shut down internationally mandated accountability mechanisms.
The intense attacks come in light of the unique and historic mandate of the present Commission, the first permanent UN investigative body with a comprehensive mandate covering colonised Palestine, the entirety of the Palestinian people, including refugees and exiles in the diaspora. As such, the present Commission is a crucial step toward the recognition and remedy of Israel’s settler-colonial and apartheid regime as the root cause of Israel’s perpetual violations of
international law in Palestine.
Our organizations condemn and call for the end of the pressing attacks by Israel, the US-led coalition, and several organisations on the CoI. We call on all States to provide the utmost political, institutional and material support, and to engage in good faith with the mandate of the CoI, to enable this important accountability mechanism to continue with its mandate unhindered.
List of Endorsing Organisations:
Palestinian Organisations
1- Addameer Prisoner Support and Human Rights Association
2- Al Mezan Center for Human Rights
3- Al-Haq, Law in the Service of Man
4- Bisan Center for Research and Development
5- Center for Defense of Liberties &amp; Civil Rights &quot;HURRYYAT&quot;