GAZA STRIP THE HUMANITARIAN IMPACT OF 15 YEARS OF THE BLOCKADE

In June 2007, following the military takeover of Gaza by Hamas, the
Israeli authorities significantly intensified existing movement restrictions,
virtually isolating the Gaza Strip from the rest of the occupied Palestinian
territory (oPt), and the world. This land, sea and air blockade has
significantly exacerbated previous restrictions, limiting the number and
specified categories of people and goods allowed in and out through the
Israeli-controlled crossings.
l Prior to the Second Intifada in 2000, up to half a million exits of people
from Gaza into Israel, primarily workers, were recorded in a single month.
For the first seven years of the blockade, this number declined to just over
4,000 on average, rising to 10,400 monthly over the next eight years.
l So far in 2022, the Israeli authorities have approved only 64% of patients’
requests to exit Gaza mainly for specialized treatment in the West
Bank, including East Jerusalem, by the time of the scheduled medical
appointment. In previous years, patients have died while awaiting a
response to their application.
The Egyptian authorities closed the Rafah border crossing with Gaza for
long periods after 2014 following political unrest in Egypt. Rafah has been
mostly operational since mid-2018, and was open for 95 days out of 151 in
the first five months of 2022.
After the blockade, the number of truckloads of commercial goods exiting
Gaza dropped significantly to only two truckloads on average per month in
2009. Following the 2014 escalation of hostilities, commercial transfers
from Gaza to the West Bank resumed, and from March 2015 exports to
Israel also resumed. In August 2021, exports to Egypt started for the
first time, boosting the monthly average of exports to 787 in the first five
months of 2022. Pre-blockade, the average monthly high was 961.
The volume of truckloads entering Gaza in the first five months of 2022,
around 8,000 per month, was about 30% below the monthly average for
the first half of 2007, before the blockade. Since then, the population has
grown by more than 50%.
Israeli forces have largely restricted access to areas within 300 metres
of the Gaza side of the perimeter fence with Israel; areas several hundred
metres beyond are deemed not safe, preventing, or discouraging,
agricultural activities.
Israeli forces restrict access off the Gaza coast, currently only allowing
fishermen to access 50% of the fishing waters allocated for this purpose
under the Oslo Accords.
Unemployment levels in Gaza are amongst the highest in the world: the
Q1 jobless rate in 2022 was 46.6%, compared with an average of 34.8%
in 2006. Youth unemployment for the same period (age 15-29) stands at
62.5%. (PCBS)
31% of households in Gaza have difficulties meeting essential education
needs such as tuition fees and books, due to lack of financial resources.
1.3 million out of 2.1 million Palestinians in Gaza (62%) require food
assistance.
At its current operating capacity, the Gaza Power Plant can only produce up
to 80 megawatts (MW), supplemented by 120 MW purchased from Israel,
meeting about 50% of the electricity demand in Gaza (400-450MW). In
2021, rolling power cuts averaged 11 hours per day.
78% of piped water in Gaza is unfit for human consumption. 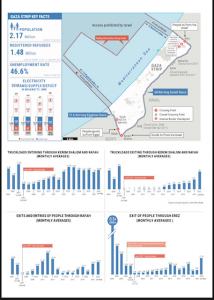 1. About 2.1 million Palestinians in Gaza are ‘locked in’, the vast
majority unable to access the remainder of the oPt and the
outside world, limiting access to medical treatment unavailable
in Gaza, to higher education, to family and social life, and to
employment and economic opportunities. Movement restrictions
imposed by the Israeli authorities since the early 1990s and which
were intensified after the Hamas takeover of June 2007, citing
security justifications, have had a profound impact on living
conditions in Gaza and have fragmented the territorial unity and
the economic and social fabric of the oPt. Those eligible for
exit permits constitute a small minority, primarily day labourers,
businesspeople, medical patients and staff of international
organizations. While the isolation of Gaza has been eased to some
degree by Egypt’s reopening of the Rafah crossing since 2018,
movement through Rafah remains restricted and the selection
criteria for travelers uncertain.

2. Longstanding access restrictions imposed by the Israeli
authorities have undermined Gaza’s economy, resulting in high
unemployment, food insecurity and aid dependency. These
include restrictions on the marketing of goods in the West Bank
and Israel; on the entry of certain goods to Gaza; and on the access
of people to agricultural land and fishing waters in Gaza itself. The
impact of access restrictions is compounded by recurrent rounds
of hostilities, which have resulted in the loss of assets and people
being left with long-term disabilities; by a chronic energy crisis;
and by the ongoing internal Palestinian divide. In August 2021, the Israeli authorities expanded the number of items permitted into
Gaza, lifting broad restrictions introduced during the May 2021
escalation.
3. Restrictions on the entry of goods considered by the Israeli
authorities as ’dual-use’ items, imposed citing security concerns,
continue to undermine the quality of basic services and impede
efforts to address housing needs. Limited access to construction
materials and critical equipment since 2007 has delayed the
construction, repair and upgrade of homes and infrastructure
needed to address high population growth and the devastation
caused by recurrent hostilities. This has undermined the quality
of health, education, and water and sanitation services available
in Gaza, and prolonged the displacement of those who have lost
their homes. Although, following the 2014 hostilities, the entry
of restricted construction materials has been facilitated by the
temporary Gaza Reconstruction Mechanism (GRM), the entry of
other restricted items, particularly those required for water and
sanitation projects, remains a major challenge.

4. The blockade has raised concern about collective punishment
and other possible violations under international humanitarian
and human rights law. The blockade on Gaza should be fully
lifted in line with Security Council Resolution 1860. However,
improvements can still be made within the framework of the
blockade regarding easing the restrictions on the entry and exit
of people and goods.