The Gaza Strip is a war-ravaged, poverty-stricken area, locked into 365 square kilometers and living under a tight illegal blockade on land, air and sea, which entered its tenth year in June 2016. The blockade, in addition to recurrent armed violence and conflict, today remains the principle causes of the socio-economic and psychosocial crisis in Gaza. The restrictions on movement of people and goods continue to collectively punish the civilian population, affecting every aspect of life in Gaza, undermining the local economy and threatening the enjoyment of most human rights, in clear violation of Israel’s legal obligations under international law. In addition, since restrictions have been imposed by the Egyptian authorities from June 2013 onwards, also the Rafah crossing between Gaza and Egypt remains closed except for a few days per year.

But what does it mean to live under a blockade? During June 2016, UNRWA shares the stories of Jihad, Amjad, Hayam and Salwa and their everyday struggle to make ends meet: Jihad needs to search through the rubble from the devastating 2014 conflict to find steel and stones to sell in the local market; fisherman Amjad often returns from the Gaza sea to his family with empty hands due to the heavy access restrictions that led to the disruption of livelihoods and a dramatic decrease in the fish catch; Hevam and her sick son Ali are desperately waiting for a permit from Israel to leave Gaza and get medical treatment; and for Salwa and her family, running water is just a far off dream.

Their stories are real stories; their lives are real lives – and these are just four out of hundreds of thousands of people living in similar conditions in the Gaza Strip, under restrictions that have reduced access to livelihoods, basic services and housing, disrupted family life, and undermined the people’s hopes for a secure and prosperous future.

Conditions in the Gaza Strip are unsettling and unbearable, and they become worse every single day eroding whatever resilience the people in Gaza still have left. People in Gaza deserve life. The blockade must be lifted, now. 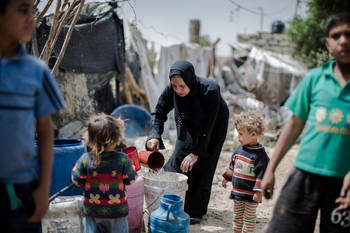 Thirty-three-year-old Salwa Abu Nemer, a Palestine refugee woman, and her eight children live in a makeshift shelter in Khan Younis, southern Gaza. The family lives under trying and undignified circumstances. Yet while they don’t have a home or a source of income, Salwa considers the lack of running water as one of her family’s and neighbours’ most serious problems, as it causes disease and sickness, especially for children

Restrictions on Freedom of Movement Waiting for a Miracle 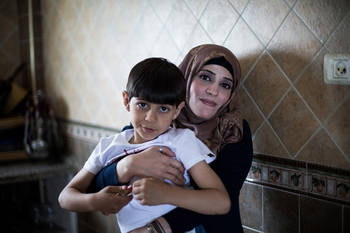 The blockade on the Gaza Strip has entailed a tight control over all aspects of life since 2007, severely restricting the movement of goods, as well as people. This lack of freedom of movement impacts the Palestinians’ right to enjoy the highest standards of human rights and development, including the right to medical treatment. 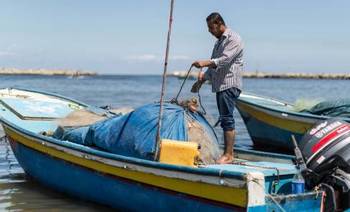 At the main fishing port of Gaza City, Al-Mina, there are dozens of fishermen trying to earn a living to provide for their children under harsh economic conditions. Forty-two-year-old Amjad al-Shirafi, a fisherman from Beach camp in western Gaza City, is a father of six. He owns a boat that he runs with his son, 17-year-old Ismail.

Rubble, Stones and Steel, A Day in the Life of a Working Mother in Gaza

Jihad’s life, like that of all Palestinians living in Gaza, is strongly impacted by the blockade, now in its tenth year. Electricity and fuel shortages, food insecurity, sky-rocketing unemployment rates, extreme water pollution, 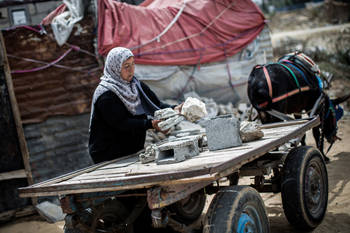