A nightmare for Gaza’s young doctors

Abeer Ghirbawi had never worked amid such tension before. 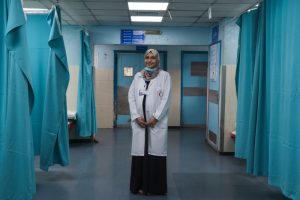 Abeer Ghirbawi, a surgeon at al-Shifa hospital in Gaza City, was pregnant with her first children during Israel’s May attack. (Jamileh Tawfiq)

When Israel began bombing Gaza in May, an older doctor gathered her and other colleagues in al-Shifa hospital.The older doctor tried to give everyone some emotional support and prepare them for the horrors about to unfold. It was the first time that Ghirbawi, a 28-year-old surgeon, had been on medical duty during a major offensive against Gaza.“Soon enough, the hospital was full of dead bodies and injured people in need of immediate care,” Ghirbawi said. “Yes, it was harder than I had imagined. But I had to focus on saving as many lives as I could – no matter how horrible the scene was. I had already known that working in such situations was a part of my job. But I was surprised by my own endurance.”Ghirbawi was in a different situation to many other colleagues. She was pregnant with her first child.“To be honest, I almost forgot I was pregnant,” said Ghirbawi, who has subsequently given birth. “I was lucky to have my husband by my side. He is also a doctor in the same department. Being together at the hospital was comforting. But both of our families were worried about us.”She and her husband were only able to go home twice during the 11 days of the attack.The area around al-Shifa hospital witnessed some of the worst violence.Al-Shifa is located close to al-Wihda street in Gaza City, where Israel carried out a massacre on 16 May. Israel’s bombardment left a large crater in the road leading to the hospital.Because of that crater, ambulances were obstructed from traveling to and from al-Shifa.

Despite their best efforts to remain focused and motivated, the staff at al-Shifa were devastated to learn that one of their colleagues was among more than 40 people killed in that massacre. 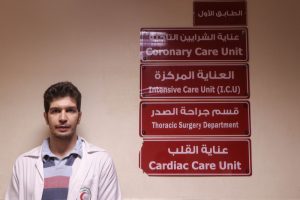 Dr. Ayman Abu al-Ouf, head of internal medicine at the hospital, had just returned home after a day’s work when his neighborhood was attacked without warning. He, his wife and two of their children were killed – along with both his parents and many relatives.Ayman Abu al-Ouf’s son Omar was injured in the massacre. Unlike his parents and siblings, he survived.Mustafa Abu Foudah, 27, works in al-Shifa’s intensive care unit, where Omar was treated.”We had no clue,” Abu Foudah said, how to tell Omar that so many of his family had been wiped out. “I can hardly describe that incident.”The intensive care unit’s resources were already under strain before Israel’s May attack. Its staff were busy taking care of patients with COVID-19.“It was very challenging for us to deal with COVID-19 and Israel’s assault at the same time,” Abu Foudah said. “We had to move COVID patients to other hospitals so that we could limit the infection and control the situation. It was a complete mess. We were all frightened and stressed. But we managed to arrange everything in less than an hour – which was extremely fast under the circumstances.”Abu Foudah had major worries of his own when the attack occurred. His father was unwell and has subsequently died.“I was scared something bad might happen to him when I was not home,” Abu Foudah added. “At the same time, I had to concentrate on my work at the ICU which is a big responsibility. I was torn between my duty to my sick father – who supported me to become a doctor – and my professional and national duties.”

Today, the intensive care unit is again treating patients with COVID-19. Yet nobody can forget about the terrible days of May. 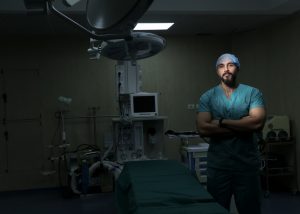 Muhammad Ziara was on duty in al-Shifa hospital when Israel carried out a massacre nearby. (Jamileh Tawfiq)

“I can still remember the smell of the war, the smells after the bombings were suffocating,” said Abu Foudah. “And the blood on the hospital floor. I can also remember the fear in people’s eyes, whether they were patients or doctors. We could feel that this assault was different [to the three other Israeli attacks since December 2008]. The bombings were so close to the center of Gaza City. It was beyond our abilities to imagine or cope with the destruction.”Muhammad Ziara, 34, is a surgeon at al-Shifa. He had previously worked as a doctor during Israel’s 51-day assault on Gaza in 2014.Although the attack in May this year was shorter in duration, Ziara concurs that it involved more targeting of Gaza City, including the neighborhood around the hospital.As the bombardment of al-Wihda street began in the early hours of 16 May, Ziara was about to have a coffee break. He was at the hospital gate and heading toward a cafe across the road, when he heard loud explosions.“I was totally stunned,” he said. “I didn’t know which way to go. The sounds were horrifying and it was hard to tell where exactly they were bombing. I took out my phone and started filming.”“Honestly, those were the longest two minutes of my entire life,” he added. “Then I found myself running back to the hospital so that we could admit the injured and the bodies of people who had been killed.”Ziara acknowledges that he remains in shock. “I am trying to look after my mental health,” he said. “The period after each attack isn’t easier than the attack itself.”Like many others in Gaza, Ziara fears that Israel will launch another major attack within the next few years.“Nobody wants to live through such a nightmare again – or even imagine it,” he said.

“But, as doctors, we always must be ready. This is part of our lives.”

This entry was posted in Uncategorized. Bookmark the permalink.