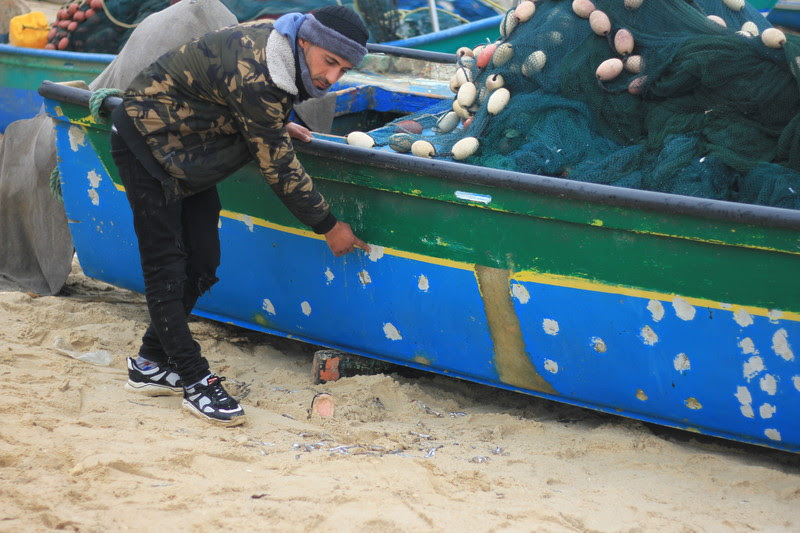 Beirut al-Aqraa was two miles out at sea when his fishing boat started to sink. He immediately headed back toward the shore but a few hundred meters away from it, the vessel became completely submerged in water.

Along with two of his workers, Beirut swam to safety. Yet three of his brothers had to be rescued and were brought to hospital.

“Luckily, it was around 1 o’clock in the afternoon,” said Beirut. “And some other fishers saw us and rushed to help us.”

The accident had a serious effect on his brother Nayef.

“If I had been stuck at sea any longer, I would have died,” Nayef said. “I have vomited every day since then. And I have a fear of the sea. I will never sail again. I would prefer to stay jobless than to go out on Beirut’s boat once more.”

A number of Beirut’s boats had been damaged by Israel when it mounted a major attack on Gaza in May last year. Israel targeted Deir al-Balah port in central Gaza, where Beirut’s vessels were moored, during its attack.

One of the boats proved irreparable.

The boat which sank on 24 December was named Amal, the Arabic word for “hope.” It was among those damaged by Israel’s shrapnel in May.

To fix the boat properly, Beirut needed approximately 3 kilograms of fiberglass. He could not afford fiberglass, so he used a sealant, which was cheaper.

He had been able to keep working as a fisher, using Amal, since the May attack. Yet when the boat started to fall apart on 24 December, it was clear that the repair job had not been adequate.

Beirut recalled how he was nicknamed “the king of fishers” as “I used to have four boats.”

“And no one has paid any compensation for my loss,” he said.

It has been well documented that Israel often attacks Palestinian fishers directly. A total of 73 incidents in which Israel opened fire on Gaza fishers were recorded by human rights monitors between October and December.

Khader al-Saidi has been repeatedly fired on by Israel.

Following one such episode of state violence in 2017, Khader was arrested and detained for almost a year. He was accused of crossing the permitted fishing boundary off Gaza’s coastline – a boundary that is often arbitrary.

In February 2019, Khader was out fishing with his cousin Muhammad when they were attacked by the Israeli navy. The two men tried to escape but could not.

Israel’s navy fired an estimated 30 rubber-coated steel bullets at Khader, while his cousin managed to hunker down.

After being struck in both eyes, Khader fell over and lost consciousness.

“I woke up four days later in an Israeli hospital in Ashdod [a port city],” he said. “I heard someone speaking Hebrew and asked him ‘where am I?’ But he didn’t answer.”

A doctor, who spoke Arabic, then explained to Khader that he had lost sight in his right eye. His left eye would take about a week to recover, the doctor predicted.

Despite being in severe pain, Khader was shackled by hand and feet as soldiers brought him to the Erez military checkpoint, which separates Gaza and Israel.

He was escorted through the checkpoint and abandoned by the Israeli soldiers. A man came to assist him and brought him to the local police, who called an ambulance.

When Khader was examined by doctors in Gaza, they confirmed that he was now blind in both eyes.

Today, Khader seldom leaves his home. “I don’t have any desire to meet anyone,” he said.

“Israel turned me into a beggar”

He has applied for a disability allowance from the Palestinian Authority but has not received any. “I used to be a breadwinner for my extended family, nine people in total,” he said. “Now I depend on kind people to give me some money. Israel has turned me into a beggar.”

Opening fire is not the only way that Israel undermines the safety of Gaza’s fishers. The relentless siege on Gaza has caused living standards to decline generally and particularly among fishers.

Many fishers cannot foot the bill for maintenance work on their vessels. Israel’s import restrictions have also led to a shortage of spare parts.

The shortage means that when spare parts are available to buy, they are more expensive than they were previously.

According to one man who carries out repair work on Gaza’s boats, the price of a new engine for a medium-sized vessel is now more than $11,000 – almost twice what it was a decade ago.

The consequence of working in boats that are not seaworthy can prove fatal – as the story of Muhammad Musleh illustrates.

Muhammad, 40, drowned in September when the boat in which he was fishing capsized. Its engine had ceased to function.

His brother, Alaa, admitted that the boat was not in good condition. But the family had to keep using it for reasons of economic necessity.

“If we had had money to buy another engine, we wouldn’t have lost Muhammed,” Alaa said. “But we couldn’t afford a new one. And we still can’t.”

“I know it was wrong for us to go out to sea,” he said. “But we didn’t have another choice. I am a father of four, Fayez [another brother] is a father of three and Muhammad was also a father of four. Who else will feed our children?”

Ahmed Al-Sammak is a journalist based in Gaza.